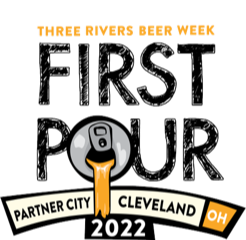 The First Pour Beer Festival is the official kick off to Three Rivers Beer Week - a celebration of locally made craft beer. Get your tickets now to be part of this year’s big event.

Pittsburgh and Cleveland: Partners in Beer

Pittsburgh and Cleveland are known for having a fierce rivalry on the playing field. When it comes to beer, though, the interactions are much more friendly.

That’s the big reason why the Pittsburgh Brewers Guild teamed up with the organizers of Cleveland Beer Week to help line up a number of different collaboration beers that will be highlighted during this year’s Three Rivers Beer Week. The collaborations this year were focused on representing the geographically unique brewery trails laid out in the PIttsburgh Brewery Guide. You will find at least one collaboration on each of the seven trails.

The beers will be available at the host Pittsburgh brewery and likely some other participating breweries on each trail. Want to try all the collaborations in one location? Join us at our annual fundraising event to support Pittsburgh Breweries at Three Rivers Beer Week: First Pour beer festival on Saturday, Oct. 1 (6:00 p.m. – 10:00 p.m.) at THIS IS RED in Munhall, PA – about seven miles up the Monongahela River from downtown Pittsburgh.

Oh, and if you want to keep things going after you hit up all the fun Pittsburgh brewery events, head over to Cleveland for Cleveland Beer Week on Oct. 14-23, 2022.